This is one of the most widespread pest mosquitoes in the world. In North America, it is common in southern Canada and is found throughout the United States, with the exception of Hawaii. They are vicious biters and are responsible for most mosquito nuisance complaints. They are known vectors of Western Equine and St. Louis Encephalitis. They can also be vectors in dog heartworm.


This mosquito is also known as the Dark Ricefield Mosquito. The females are furious biters in day or night. Hosts include any warm blooded animal; however bovine blood seems to be preferred. Well documented studies of cattle have shown severe losses in weight gain and milk production resulting from the bloodfeeding activity of this mosquito. Certainly, Psorophora Columbiae causes extreme annoyance to people.
Location
The mosquito is a known vector of encephalitis. It is a widespread pest from Florida, where it is known as the 'glades mosquito', to New York. Scattered populations exist across the United States westward to California. The species is found in Mexico, Central America, the Caribbean and South America to Argentina. Psorophora columbiae reaches its greatest abundance in the rice growing areas of the southwestern U.S. where astronomical numbers, similar in magnitude to the production of saltmarsh mosquitoes, may occur. 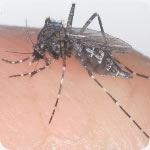 Physical Characteristics
Psorophora Columbiae is a large dark mosquito with white or yellowish markings. The tarsi and proboscis are dark brown and banded with white scales. The hind femora have an apical white band and white knee spots. The first segment of the hind tarsus is brown with a white ring in the middle. The wings are speckled dark brown and white.


Irrigation or rainwater that ponds and stands for more than three days, such as over-irrigated or poorly leveled yards and pastures, tail-water ponds, desert ponds, stock tanks, backed up washes and flood control drainage areas.


Eggs are laid on soil in areas where water has ponded, where they will lay dormant until flooded by water from the next rain or irrigation. Only one generation is produced per flooding.


Most active at sundown when they attack man and animals in swarms.